“Islam taught that I must turn my grief into good deeds for the living, deeds that would fuel his soul’s journey not hinder it. My spiritual teachers reminded me that the quality of the rest of my life totally depended on my reaction to Tariq’s murder…”

And hold fast,
All together by the rope
Which God stretches out for you
And be not divided among yourselves
And remember with gratitude
God’s favor on you
For ye were enemies
And He joined your hearts In love, so that by His grace
Ye became brethren
Qur’anic Ayat [3:103]

I wasn’t planning to write another post today but unfortunately, I happened to glance at the so called  ‘News’ headlines and see yet another blast of hatred from that man leading the polls who seems to hate everyone!

It’s shameful and it’s disgusting and in a time when we desperately need to come together, we have these so called ‘leaders’ who manufacture hate continuously…like in the Exorcist, their hatred comes pouring out, infecting and poisoning everyone.
And this has been going on for centuries: the Nazis hated the Jews, the White conquerors hated the Native People, the Rednecks hate the gays…now we’re supposed to hate Mexicans but lately that changed to Muslims. Propaganda is created and the sheep fall for it..never questioning what is truth.

Ask who benefits from hate, ask who it is that creates all the terrorism and it may not be the people you think….probably isn’t. For example, watch the recent interview with Steven Seagal relating to the mass shootings…do the research, wonder why the FEMA Chief did an interview on NPR the day after 911 and said “We arrived in New York on September 10th ready to go to work” and wonder why that interview was immediately cut. Ask who benefits from all this and ask if this is really the way most people want to live.

Several years ago, I created a photo/oral history exhibit on loss, grief and transcendence called Between Now and Forever and I interviewed several people who had experienced a great loss. 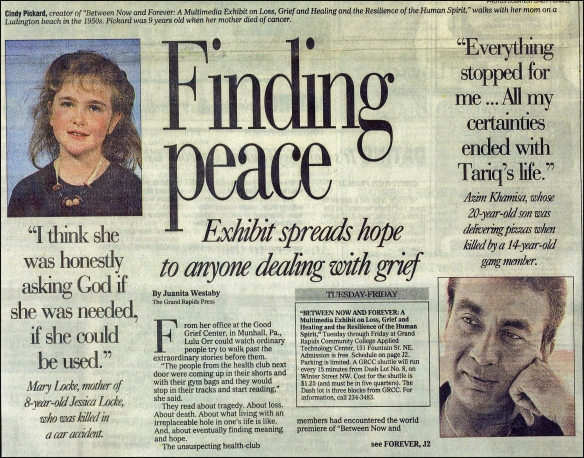 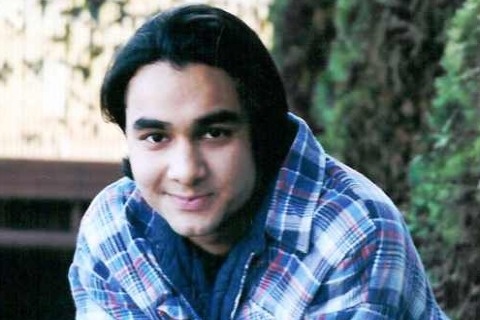 Tariq was an art student at a local college and he had a night job delivering pizza.  Answering a last call one night, Tariq was killed by a 14 year old gang member. 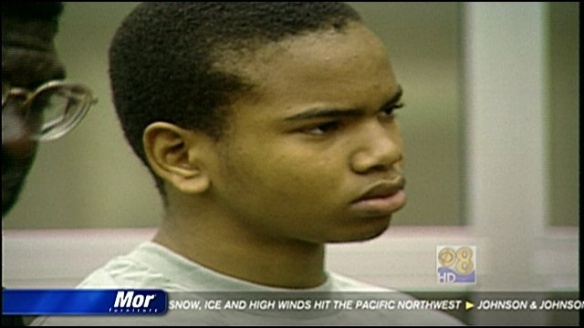 Azim Khamisa and his family are Muslim.
About Tariq’s death, Azim wrote:

Like so many of us [do] when horror strikes, I turned to my faith [Islam] for wisdom and for strength and it was there waiting for me. My spiritual teachers reminded me that mourning could fill the first 40 days of Tariq’s journey in the next world, but then after we said the prayers that closed the 40 days, excessive grieving would impede his soul’s journey. Islam taught that I must turn my grief into good deeds for the living, deeds that would fuel his soul’s journey not hinder it. My spiritual teachers reminded me that the quality of the rest of my life totally depended on my reaction to Tariq’s murder.  And for life to have quality, it must have purpose.

I decided my purpose would be stopping other children from killing each other. I would become the foe, not of my son’s killer, but of the forces that put a boy a boy on a dark street, holding a handgun….. I founded the Tariq Khamisa Foundation to do this new work in memory of my son, Tariq. 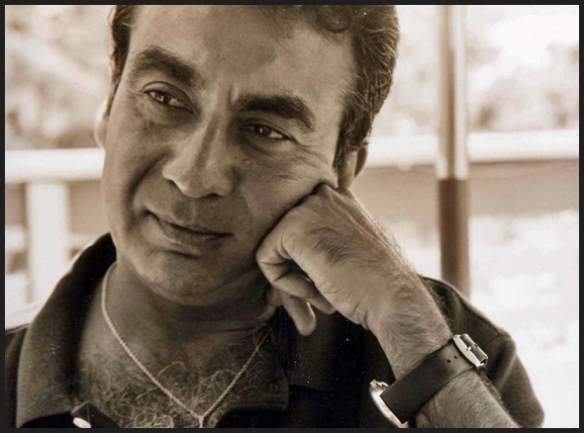 Through those early days, my thoughts kept going to the family of the other boy, Tony Hicks. What must his family be suffering? …..I asked the city prosecutor to introduce me to Ples Felix, the boy’s grandfather and also his guardian.
He’s a good man, this Ples Felix, a kind, smart, caring man who is a project manager for the city of San Diego. He has a masters degree in urban development, he did two tours of duty in Viet Nam as a Green Beret, and he’s also devoutly spiritual. He dearly loved his grandson and was devastated by what the boy had done on the first night he had ever defied his grandfather and left the house to meet with a gang. 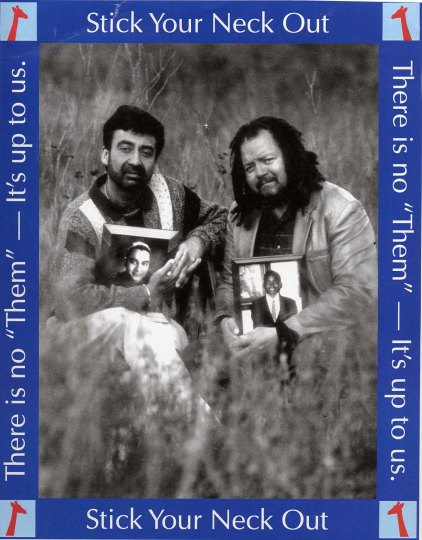 When I met Ples, Ples told me of his daily prayers for me and my family and I told him of my concern for him, for Tony and more importantly, for all the other kids who were trying to cope with this violent world….. It was an act of great bravery for him to offer his services to the foundation. 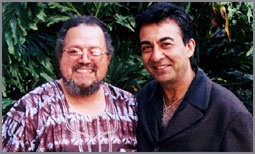 Since then, which was six years ago, Ples and I have done the work of the Tariq Khamisa Foundation together, saving children’s lives together. Two men who have endured unendurable losses. His grandson, a boy he knew as gentle and loving, was the first juvenile sentenced as an adult in California. He was sent to the maximum security prison in Folsom
.
So we are brothers in grief, Ples and I, brothers in our determination to end the hideous cycle of violence, and I’m proud to say, brother Giraffes, honored together by the Giraffe project which is telling our story far and wide.

“Be a lamp, or a lifeboat, or a ladder. Help someone’s soul heal. Walk out of your house like a shepherd.”

Last year we presented our anti-violence program to 18,000 San Diego kids in 70 schools. Just 12 days ago, on October 17th, the national day of concern, 148,000 from K-12 in the San Diego Unified School District, heard our message of peace and forgiveness. They are surprised to see us together, these kids. In their world, injury and insult lead to violence in an escalating cycle. But they see us, they hear us speak about the tragedy of violence and they speak, many of them for the first time ever, of the pain that violence has caused in their own lives……..The kids in our program pledge themselves to non violence, violent incidents decrease at their schools, fewer kids join gangs: Our program works. 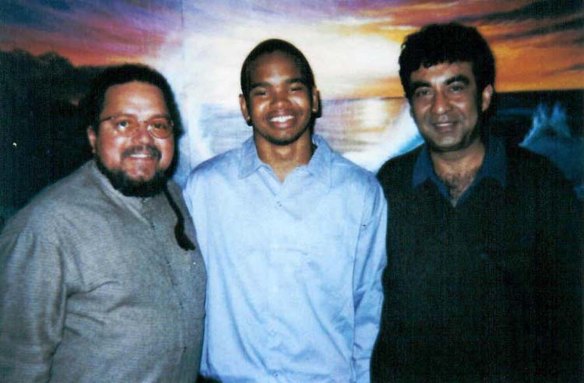 There’s another kid for whom things are now getting better: Tony Hicks. He’s now been moved to Calpatria prison, a far less dangerous place than Folsom. It took me a while, but now I go with Ples to visit Tony. When he was first arrested the boy had no remorse, no understanding of what he had done. But by the time of his trial, he did understand and took responsibility.
He’s no longer the tough talking, unfeeling kid, being macho for his gang. Now he talks to us about his regrets, about his fears and about his hopes. Because people outside the prison system, refused to abandon hope for him, Tony Hicks will be a productive, contributing citizen when he’s at last a free man. And I have told him that when that day comes, there will be a job waiting for him at the Tariq Khamisa Foundation. In my heart of hearts, I believe we will save Tony, and in turn Tony will save thousands of other children.
The Peacemakers and The Warmakers:
Many years ago, Elisabeth Kubler-Ross said to me in a conversation” In the times that are coming, people will either make their choices out of fear or out of love. There will be no middle ground.  For those who make their choices out of fear, things will get much worse but for those who make their choices out of love, things will get much better.”

Something else regarding Islam:

Several years ago, on my way to Greece, I went through Turkey where I visited historical sites, a place where Persian rugs were made and The House of Mary in the city of Ephesus.

I wonder how many people know about the following and have thought about its significance.

In Islam, Jesus is considered a prophet. His mother, Mary is also revered with a chapter in the Qur’an devoted to her. Some believe that after the death and resurrection of Jesus, Mary was taken to the city of Ephesus, in what is now Turkey. Because of this, as well as the travels and writings of the apostle, Ephesus became an important place in early Christendom. A small stone structure called the “House of Mary” stands in Ephesus. Both Christians and Muslims, believe it is the place where Mary lived while in the city.

I wonder how many people know that the mother of Jesus is recognized in the Qur’an. In fact the Qur’an has a whole chapter titled Mary. And there the Immaculate Conception and the virginal birth of Jesus is described.

In the Qur’an Mary is alone when she gives birth, and carrying the child she came to her people who said to her, “Mary, this is indeed a strange thing.” And they do not stop there, but continue with their abuse. Then Mary made a sign to them pointing to the child. But they replied, “How can we speak with a babe in the cradle?” Whereupon the babe spoke and said, “I am the servant of God. He has given me and ordained me a prophet. His blessing is upon me wherever I go. Blessed was I on the day I was born and blessed I shall be on the day of my death and on the day I shall be raised alive.”

from an article titled: Islam’s View of Mary

“Be a lamp, or a lifeboat, or a ladder. Help someone’s soul heal. Walk out of your house like a shepherd.”

And once again, because it’s so relevant to everything, Willy Nelson’s song Whatever Happened to Peace on Earth