~Bob Dylan, from Masters of War

I usually try to write about peaceful, beautiful, hopeful things..I try to write to inspire but I’m writing this tonight because of a news headline I saw on Yahoo yesterday. The headline read:

I’ve been reading a lot about the possibilities of WWW III recently but I hadn’t seen anything quite this blatant…..preparing the people for what’s coming. Of course none of these places are options for most of us…..Iceland, a remote island off of Scotland..are you kidding???

Almost 20 years ago, I did a project called The Gathering of the Wisdom People. I interviewed and photographed people in their 90s and then combined their interviews and old photos with my photographs…. to make large framed, collage like pieces.

The exhibit was a great success…

…people seemed to love reading the stories and looking at the old photos..it was sort of  a romanticized vision of another time….almost a fantasy..not real.

All of the ‘Wisdom People’ had lived through the world wars and the Great Depression and many of them shared their experiences. These experiences were very real & they had been changed by them but to me they were stories: a World War, a Great Depression…that can’t happen now……Except they can and they are.

One woman’s story in particular, made the greatest impression on me.

This woman whose name was Rose Hanauer, was born and raised in Berlin in an upper middle class Jewish family. 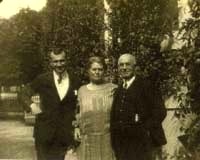 For her interview, Rose wrote:

My brother-at that time-the year was 1938- still thought Hitler would not be in power very long, one should wait.
My husband and I left Germany as soon as we received our permit to get into England. We left Germany Aug. 11, 1939 which was less than three weeks before England declared war against Germany! Of course we had to leave everything of value behind!

We would have loved to apply for my mother to get out of Germany too, but she did not want to leave as long as my brother and his wife and two small children were still in Germany. Well none of them got out, and they were all taken to Concentration Camps and killed by the Nazis.

The day before we left for England, my brother said to me, “I guess you were the smarter one, it looks pretty bad now!” ~Rose Hanauer

~Bob Dylan,  from Masters of War

So now World War III is maybe looming on the horizon. This is what ‘The Masters of War’ [the ‘leaders’] want and they will do their part by telling us we can be safe in the Yukon.

And I know many people are thinking, probably the majority, that this cannot happen..but it already has happened.. ..Twice!

So it seems to me that the choice now is to take the red pill and look at what’s actually going on, to wake up, to say  NO WE DON’T WANT THIS!.. or take the blue pill and remain or try to remain in a pretend world which I don’t think will be possible much longer.

Let me ask you one question
Is your money that good?
Will it buy you forgiveness
Do you think that it could?
I think you will find
When your death takes its toll
All the money you made
Will never buy back your soul

Bob Dylan from Masters of War