“I have lived with several Zen masters — all of them cats.”

― Eckhart Tolle, The Power of Now: A Guide to Spiritual Enlightenment

Animals and Nature will take us back to the center..where we all belong.

All my life I’ve had animals..my dad started getting me involved with caring for animals  after my mother died when I was 9. And I had all sorts of animals, birds and reptiles including chickens, a parakeet, rabbits, turtles, a skunk, hamsters, a dog named Beetle Bomb 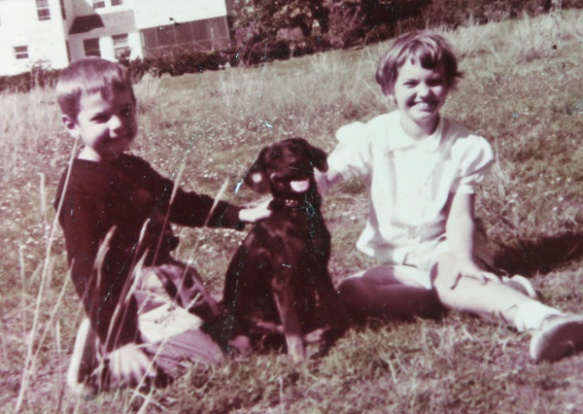 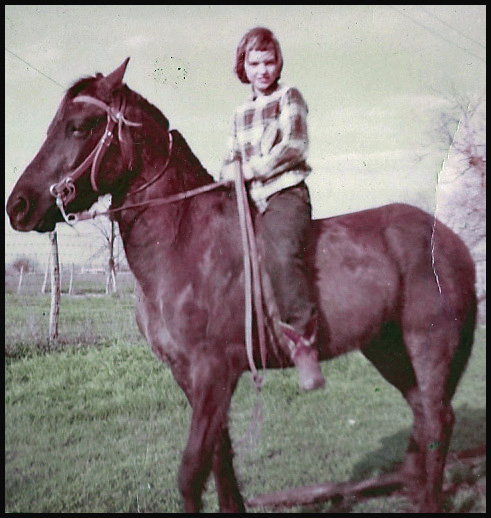 and a horse named Smokey.

I remember my first animal/bird was a baby chick my dad won for me at The State Fair of Texas. At that time, in the 50s, you could throw a penny into a container and win a chick. I was so excited! I named the chick Chee and watched him grow into a large rooster.

In the summers, I carefully transported my turtles from Texas to Michigan where I lived with my grandparents. In our little community there on the Lake Michigan, once a week there were frog and turtle races for the kids. It was a time of innocence, of being part of Nature and my turtles always participated.

These animals helped bring me through a sad and lonely time when people were not very helpful.

THE ARRIVAL OF THE CATS

I call animals “guardians of Being,” especially animals that live with humans. Because, for many humans, it’s through their contact with animals they get in touch with that level of being.

I don’t remember being especially drawn to cats though I’ve had a couple through the years; I don’t think I really appreciated them until recently.

When I moved to northern New Mexico 8 years ago, I adopted a cat for the purpose of killing mice. I named this cat Phantom because he hid for quite a long time. When he came out of hiding, he didn’t kill any mice but I came to totally love and appreciate him. 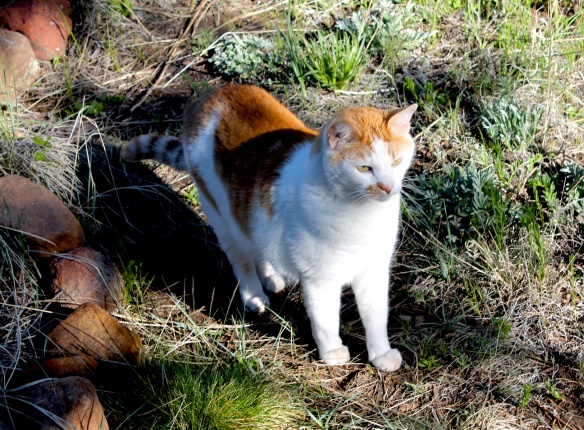 Some years later, the mouse population was out of control and I adopted Maggie, a cat from a rescue center in Taos NM

Maggie went to work on the mice immediately–I think she killed 40 in a matter of days.

She is the sweetest of beings….very gentle, very feminine and she talks all the time.

So we had 2 cats, 2 horses and 3 wolfdogs-most of them rescues- when Jody [the Brown Piglet in this blog] brought home a very tiny kitten. 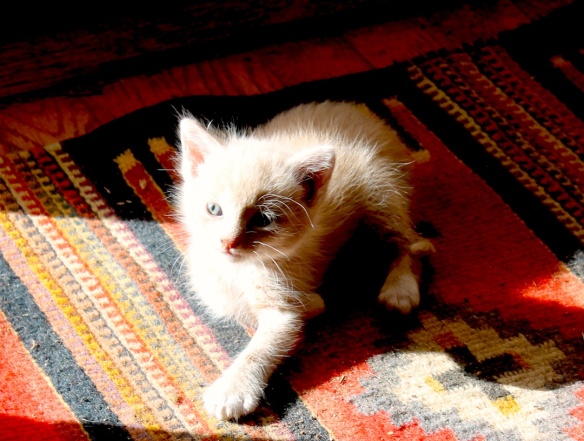 Naturally he [we thought he was a she at first] was so cute and irresistible as kittens are, but we were struggling to feed all the animals we already had. I didn’t want any more but Jody quickly became attached to the kitten–we called him Osa’ for bear in Spanish.

Not much time passed before Jody brought home another kitten from the same litter. He was about to be sent away to live as a barn cat and Jody wanted to rescue him…. we also thought he was a girl at first and named him Selena but eventually he became Sylvester

I distanced myself from the kittens…we were having a difficult time financially and for me they were another responsibility that we could not afford.

Jody however, was becoming more and more attached to them..he treated them like children and would not think of letting them go outside even for a moment.

They were getting into trouble…tearing things up, knocking lamps over..so he decided they would stay in the barn during the day. 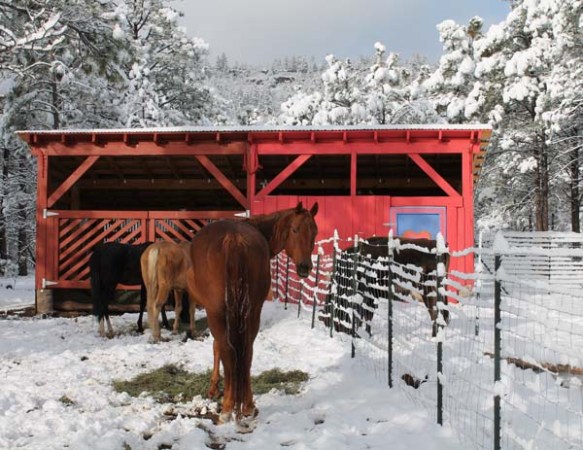 He spent hours and hours fixing it so they could not get out..putting chicken wire around the bottom and at the top but they always escaped. I could see how hard  he was trying to protect them…he called them the sons he had always wanted but never had.

He worried about them endlessly…if they coughed once or threw up, he got very upset and I began to realize that Oso and Sylvester were probably the first pets he had ever had, the first that actually belonged to him.

People who knew him could not believe that someone who appeared to be so tough, so macho, had spent much of early life in prison and jail, had totally fallen for these 2 kittens.

But I realized that they were providing the same kind of comfort as my animal family had provided for me when I was little. Jody’s love for the kittens was taking him back to the little boy he once was before he was forced to fight and prove himself to his violent and abusive father.

We found a wonderful service in Santa Fe that provided funding for neutering and spaying cats and once they were neutered Jody agreed that could spend a little time outside during the day….. 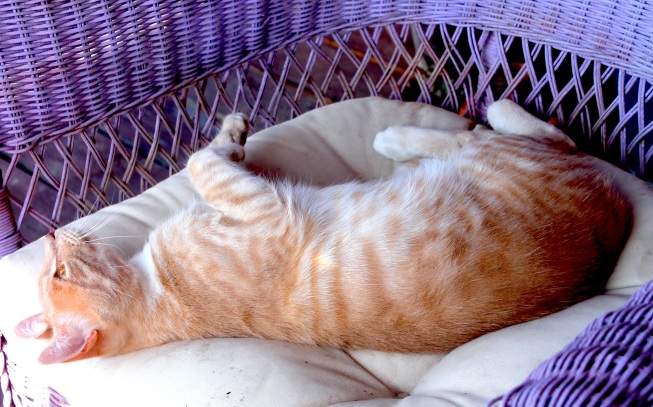 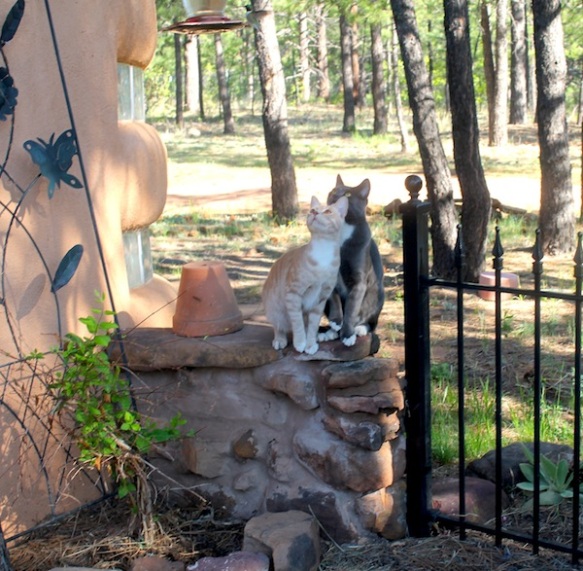 I had never seen cats behave the way Oso and Sylvester do with Jody……cats have always seemed to me to be very independent beings..living alongside humans but separately…keeping their own counsel

Most amazing are the daily cat massages Jody gives Oso. 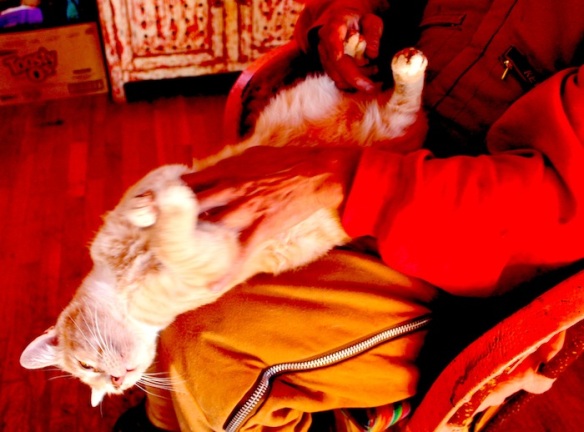 but Oso enjoys a massage almost like a human

And so I think this is The POWER of LOVE ….which heals, which unites, which brings compassion and understanding and beauty into this world…

Below is a little slideshow I made about our cats, author Kinky Friedman’s Eulogy for his cat Cuddles…..and Memory from CATS because it is one of my most favorite songs

On January 4, 1993, the cat in this book and the books that preceded it was put to sleep in Kerrville, Texas, by Dr. W.H. Hoegemeyer and myself. Cuddles was fourteen years old, a respectable age. She was as close to me as any human being I have ever known.

Cuddles and I spent many years together, both in New York, where I first found her as a little kitten on the street in Chinatown, and later on the ranch in Texas. She was always with me, on the table, on the bed, by the fireplace, beside the typewriter, on top of my suitcase when I returned from a trip.

I dug Cuddles’ grave with a silver spade, in the little garden by the stream behind the old green trailer where both of us lived in the summertime. Her burial shroud was my old New York sweatshirt and in the grave with her is a can of tuna and a cigar.

A few days ago I received a sympathy note from Bill Hoegemeyer, the veterinarian. It opened with a verse by Irving Townshend: “We who choose to surround ourselves with lives even more temporary than our own live within a fragile circle…”

Now, as I write this, on a gray winter day by the fireside, I can almost feel her light tread, moving from my head and my heart down through my fingertips to the keys of the typewriter. People may surprise you with unexpected kindness. Dogs have a depth of loyalty that often we seem unworthy of. But the love of a cat is a blessing, a privilege in this world.

They say when you die and go to heaven all the dogs and cats you’ve ever had in your life come running to meet you.

Until that day, rest in peace, Cuddles

Cats is an award-winning musical composed by Andrew Lloyd Webber based on Old Possum’s Book of Practical Cats and other poems by T. S. Eliot.