Really, I just wanted to write down some thoughts about Christmas and I wanted to thank all those people who helped me this past year and I also wanted to put up some amazing photos my friend Karen Yeager took of my wolfdogs, Los Lobos del Norte last week…..Maybe I can weave this all together….or maybe not.

This is always a little bit of a sad time time of year for me because no matter how many years pass, I still miss Christmas with my family that I was born into. I was telling a friend a few nights ago about what those Christmases were like back then when I was little and living in Hinsdale, Il [a suburb of Chicago]. The traditions: Eating breakfast under the tree at Marshall Fields, A trip downtown

to look at the Christmas windows,

Picking out a tree with my cousins and our uncle always with the snow falling, The old treasured ornaments we put up year after, Sledding and Skating on Christmas Day.

But those Christmases are in the distant past, they will never be again and here I am living in the mountains of northern New Mexico, living a life I never, ever could possibly have imagined. As I’m writing it’s starting to snow.

So I still have the snow.

I guess most people look back this time of year and as I look back,  I’m looking at a year that has been incredibly difficult. Over and over I’ve tried to understand what I was supposed to learn from my difficulties: I’m not doing the right visualizations, I have too many negative thoughts [I do], I’m a victim and I’ll never succeed etc, etc. etc. I talked to astrologers, card readers, curenderos, healers to no avail-nothing worked… and then last night I came upon this:

Simple and obvious [maybe that was what everyone was trying to tell me and I couldn’t hear it] and I saw that though it may not have been easy, I have been able to do what I needed to do when I needed to do it and that so many things that happened this past year, happened for a reason that I didn’t understand at the time.

leaving 15 month old Shiloh behind. Wolfdogs, being pack animals are not meant to live alone

and so I set out to find Shiloh a companion.

It would be easy-I knew I could do this-there are so many rescue centers, shelters, so many animals needing a home but  but no matter what I tried, I could not find a companion for Shiloh. This went on for several weeks and I got more and more discouraged looking at Shiloh so alone in his pen.

Then I came upon the website of Wanagi Wolf Rescue outside of Albuquerque and everything fell into place. I began to work with an amazing group of wolf/wolfdog rescuers and Shiloh had not only one companion but 2 within a few months. 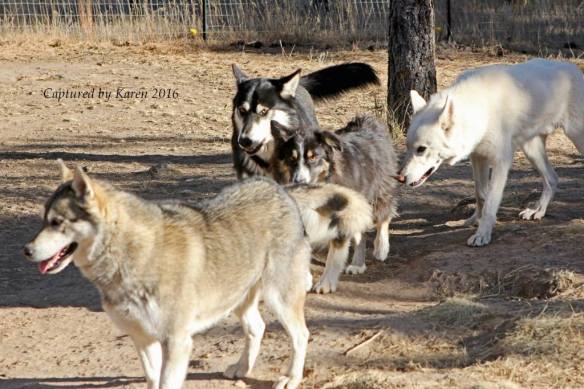 And because we rescued these 2 wolfdogs [from the jaws of death], our friend from Wanagi Wolf Rescue donates freezer- fulls 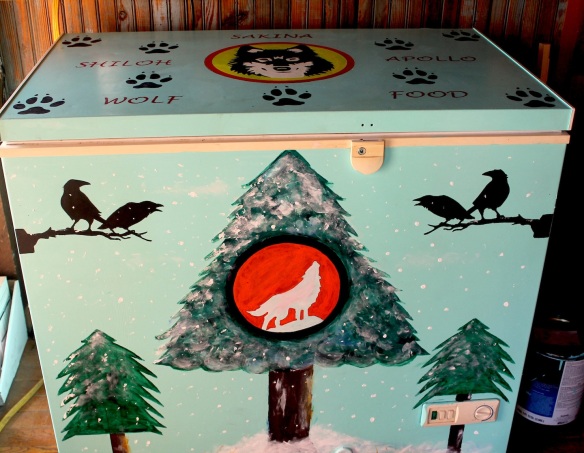 of elk, venison and ground meat for all the wolfdogs and this would never have happened if I had been initially successful in finding Shiloh a companion.

As there was so little money, we-Jody and I-  learned to barter more- trading wood for hay for the horses….

and friends who came to visit brought food.

Because I have always been able to pay for things-I grew up that way-, I didn’t really understand barter but it’s actually much more satisfying than paying with money–it’s much more of an equal exchange and it may be the way of the future.

If there had not been such a need for money, Jody might not have worked on his art so much but doing something he loved was incredibly healing for him and though it isn’t barter, still it is an exchange of love, caring and goodwill for money.

Sometimes I see pictures of the homes of friends I grew up with and went to school with and I feel a little envious- not for the homes but for an affluent lifestyle where money is never a concern. But I know that I turned that option down long ago and that I could never live that way again. I think, like ET, I would probably begin to die without the pine forest surrounding me, the cold mountain air, the warm fires in the wood stoves and the animals. No I could never go back.

A few days ago my family in Texas sent me a box of treasures and among the treasures were a roll of salami and a box of fudge. At the same time a friend had sent me the classic movie, ‘The Bishops Wife’ with Cary Grant and David Niven. I had been sick for several days and not able to eat but I sat in my fur covered rocking chair in front of the fire and while I watched ‘The Bishop’s Wife’, I ate the salami [all of it] and then the fudge. And that’s abundance!

I want to thank all of the people who helped me this year sometimes with contributions of money, sometimes food or gifts, sometimes encouraging words, sometimes just listening. The spiritual teacher, Eckhart Tolle has said that 2 of the best things we can do for another is to really listen and to leave them alone. I understand this to mean listening with full, undivided attention and to resist giving advice. When you’re down, I have discovered, there are people who will LOVE to give you advice. Giving advice= a way of feeling superior.

Anyway I don’t want to mention names because I don’t want to leave anyone out but I do want to mention one friend who checked in with me every few days, who always, with a sense of humor and goodwill, listened and encouraged me, who never gave advice and who often sent DVDS and books and gifts to cheer me up. Thank you Nancy, so much for helping me through the tough times.

*I still need help and I will for a while as I work to recover from some very unfortunate circumstances. If you want to help in some way, either with a contribution or by buying one of our art pieces, t-shirts, hoodies, films etc, you can go to Gofundme  which has the story of the ‘unfortunate circumstances’, to POOH’S STORE,  to ‘Our Films’  or use the donate-pay it forward button on the side of this blog. 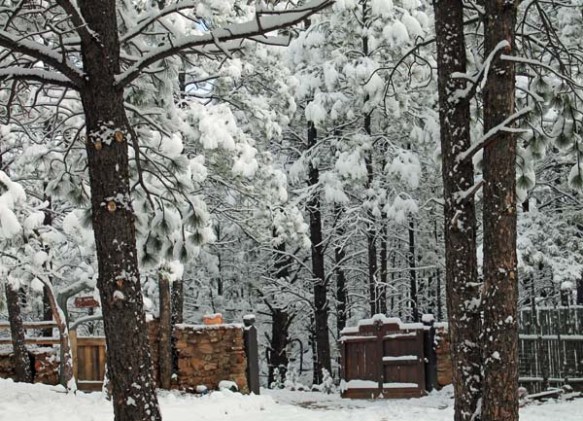 Merry Christmas and Hope always..for the New Year from here.. in the Land of Enchantment