For those of us who remember when we were spirits,
Who remember that we are spirits,
We understand we are on this spirit journey,
The circle of life which starts in the spirit world
And which takes us back there.

Because there’s so much, ever increasing, death and loss and grief now on a daily basis, I’m putting up this photo that we call THE ANGEL PICTURE and a few messages/drawings from children who died at a young age.

It seems the world is almost drowning in sadness, in darkness and at least for me, these messages, photos and drawings bring some hope, inspiration and comfort.

This photo is of Jason Briggs, age 2 and his father, Jim Briggs, his mom, Gerri Briggs and his caregiver, Jo Moore [SANTA]

Jason died of AIDS the morning after this photo was taken.

His grandmother took the photo with an Instamatic camera.The film was not developed for a few weeks and Jason’s parents did not see it until after Jason’s funeral.

The tiny, unmistakable wings which had appeared on his back brought them great comfort.

It seems young children who die, often leave messages for their parents. They seem to know where they are going and their messages can bring reassurance to all of us.

when she was killed in a car wreck.

Her parents survived and found this drawing on her bed when they went back to their apartment a few days after the accident. She had drawn it the morning of the accident which happened early in the afternoon.

Elisabeth Kubler-Ross would have called this the symbolic language: in a child’s language, the balloon is leaving the earth, floating up into the beyond. Jessica had just turned 8..there are 7 baskets and the little girl represents the number 8….blue is seen as a peaceful color, purple often represents the spiritual… 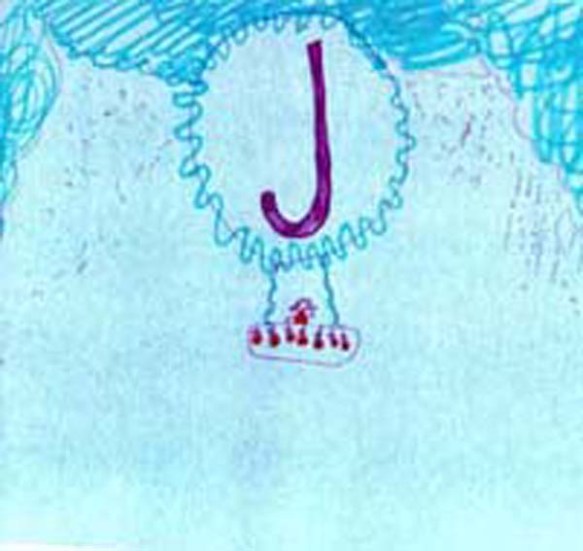 A few days later, they found this note..

“He went out of his body to a heaven he called “Summerland” for a year and a half before he died. Cory’s visits to the other side brought peace and comfort to him and to those he shared his stories with. Cory’s spirit shines on through his drawing of the crystal castle where God lives…..“

“Cory drew the bridge to Summerland…a beautiful rainbow. The faceted crystal reflects the colors of the rainbow bridge. There’s a butterfly (to left of rainbow) to represent the “transition of the soul, essence or spirit (Cory’s words) from the earth body to the sparks of light bodies seen on the other side”. (Asterisks, energy circles and atom-looking objects represent these heavenly bodies). The heart represents “unconditional love” and the stars represent happiness.”

Together, Cory and his mom, Shirley

wrote this song the year before he died:

Many people who have come close to dying, have experienced another realm, often a more peaceful, kinder and loving realm and they are not happy when they are sent back to earth.  I have not experienced this  but I do remember a time several years ago when I was taking care of my little grandson for a few hours. He was very sick with bacterial pneumonia and I was very scared. Suddenly I smelled pipe tobacco..I knew it was my dad’s pipe..if there was any scent that would remind me of my dad, it was pipe tobacco.

My grandson, Philip was named after my dad and my dad had died a few years before

so it made sense that he would come..and when I smelled the tobacco, I knew everything would be alright…and it was.

Dr. Elisabeth Kubler-Ross was one of the very early researchers of Near Death Experience. Following is an interview with her on this subject:

We have several films related to death, dying, loss, grief and Near Death Experience. They are: Elisabeth Kubler-Ross-We’re Almost Home Now, Turning Toward the Morning and As It Is In Heaven. You can find them under MOVIES